An exomoon is a moon that orbits an exoplanet. The exo part in front of exoplanet and exomoon refers to an astrophysical object that is around another star (extrasolar). If an exoplanet had a ring system like Saturn then it could be classed as an exoring. The best example we currently have of an exoring are those suspected of orbiting J1407b but have we found any exomoons yet?

Have we found any exomoons?

Currently our best candidate for an exomoon orbits the exoplanet Kepler-1625b which has a mass of more than 10 times that of Jupiter. Original analysis of the transit as it passed in front of the star suggested that there could be a moon orbiting. This moon however, was inferred to have a size comparable to Neptune, much bigger than any moon in the Solar System. Reanalysis of the transit data showed that the secondary transit thought to be from an exomoon was likely due to the way the data was reduced. Therefore, we do not have any confirmed exomoons. Earth sized planets are very hard to find around other stars due to their small size so trying to find a moon of a similar or smaller size is extremely difficult. Dedicated searches are now being carried out, so hopefully in the next few years we will see the confirmation of some exomoons.

How do they form?

Exomoons are expected to have the same formation process as moons in our Solar System, which is one of the following two mechanisms: 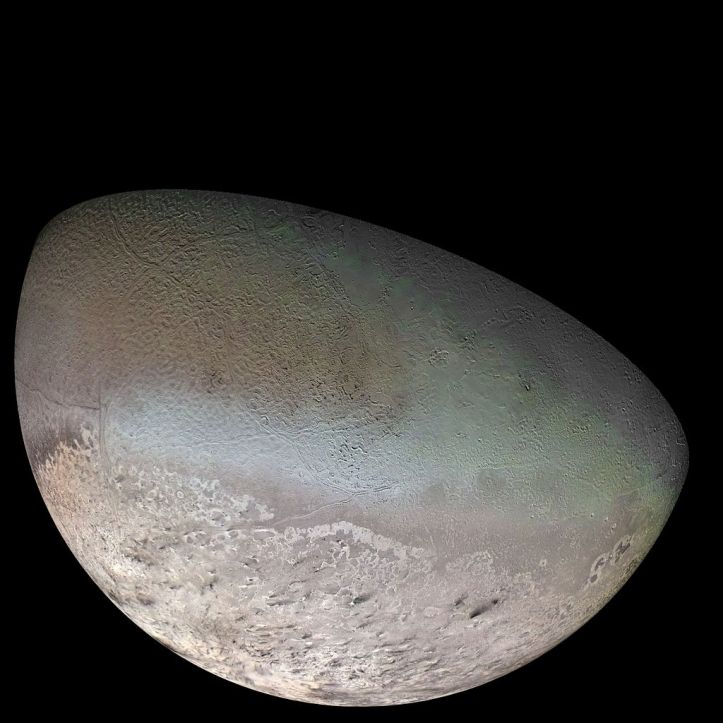 Above | An image of Triton, Neptune’s largest moon, taken by Voyager 2 in 1989 as it travel to the outer Solar System. Image credit: NASA/JPL/USGS

Could exomoons be habitable?

We know from our our Solar System that moons are capable of having liquid water and have the right composition to support life. For example, both Jupiter’s moon Europa and Saturn’s moon Enceladus (below) have frozen surfaces but liquid water oceans underneath. These moons are a long distance outside the habitable zone for our Sun and are still able to be warm enough to have liquid water.

The large tidal forces from the gas giants they orbit is capable of internally heating them to a point that can support large oceans beneath their surfaces. Therefore, it seems reasonable to assume that similar exomoons could also be internally heated by their host planet so that they could be habitable. Instead of looking for Earth-like planets around Sun-like stars we could broaden our searches to look for exomoons located much further away from their stars.

I am a Astrophysicist and lecturer in the School of Maths and Physics at the University of Lincoln. My interests lie in the computer modelling of planetary rings to help our understanding or moon and planet formation.